We've been tackling ~FRACTIONS~ the last two weeks in first grade!  I used to dread teaching fractions to 6 year old littles, but thanks to some extra CGI training on fractions...I love it!

The biggest ah-ha I've learned over the years is that fractions and shapes go together.  They are all under the umbrella of "geometry."  Having math talks about shapes bleeds over into conversations about fractions and vice versa!

We spent the first week talking about the difference between "whole" and "half."

The first day, I posed a CGI problem...

I love starting with this problem because it sets kids up for a problem....what are they going to call that part of the cookie?  In my experience, most firsties can tell, show or act out the fact that it's a half of a cookie...but not as many know how to label it.   I got a wide variety of answers once again this year...

Then, we start our whole/part anchor chart... 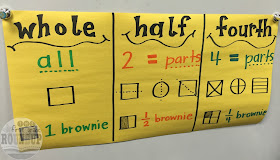 Of course, we didn't add the fourths until the second week.  Also, notice the emphasis on this anchor chart on "whole" and "part."  We worked on fraction CGI problems these weeks, but also some part part whole CGI problems and we were able to make some really great connections between these problems and fractions during our share time that made fractions easier to understand!

The next day, we did a few math talks about which shapes were divided in half using the math talk slides from my geometry packet...Then, the next morning, the kids did this sort for morning work (halves/not halves the first week and fourths/not fourths the next week).... 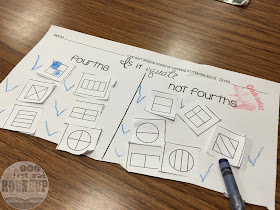 On the last "math skill" day of the week, we played "Pass the Pen," which happens to be the simplest game and one of my first graders' favorites....

Get this:
*Share the paper between your table group and choose a "pen" (or pencil or crayon) to share between your table group.
*One person starts and divides a shape in half/fourth.
*Then, they....wait for it...pass the pen...to the next person at the table who has to divide another shape in half/fourths a different or new way.
*They keep passing the pen until they cannot think of any more new ways.

It's definitely not rocket science, but they love it!  And this game is so good to use in pretty much any subject area!

If a kid doesn't know what to do, they other friends at the table can help him/her and tell her what to do, but can't do it for him.... 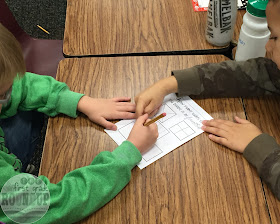 We did one round of the squares and then shared pictures and talked about if they were halves/fourths and why or why not.  We talked a lot about being precise and how that affects the partitioning.  And for whatever reason, squiggly lines were quite popular this year, so we had to talk about that too!

Once we discussed the squares they flipped their paper to the other side and played the same game with circles.

At the end of the activity, I had them pass the pen to assess the squares together and then self-assess the circles as a group.  Love these smiley face grades! :) 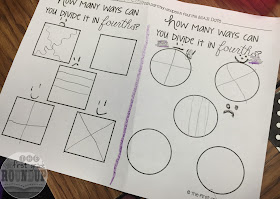 Fractions came after all of our 2D and 3D shape exploration in geometry, and our next step will be symmetry...but that will probably be after Christmas break!  We are about to be in full on assessment mode in my world! #keepinitreal

Grab these activities and more in my complete geometry packet! 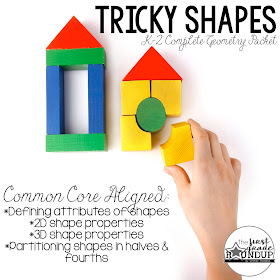