I don't know about you, but Saturday is family day at our house, so if I was going to have to teach on a Saturday, it was gonna have to be super fun for me and the kids {you know, more than just your average I'm-having-a-blast-it's-so-much-fun day in first grade!} 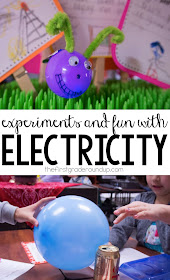 We are smack-dab in the middle of our American Contributors unit and this week we started talking about inventors.  This week's inventors focused on people who invented or studied electricity: Benjamin Franklin and Thomas Edison.

The OCD me likes to go in chronological order, so we started with Ben Franklin on Wednesday {which was actually the first day of our school week because we had two....wait for it...snow days on Monday and Tuesday...}  We read about Ben.

Then, we charted our new learning...on a KITE, of course!  {I am obsessed with shape/symbol anchor charts if you can't tell! I think it's great for emerging readers when we make so many charts because it makes it easy for them to find the information they are looking for!} 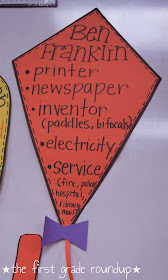 On Thursday, we focused on Ben's contribution in electricity because of his interest and experiments he conducted on electricity.  We read from our favorite rookie readers series. 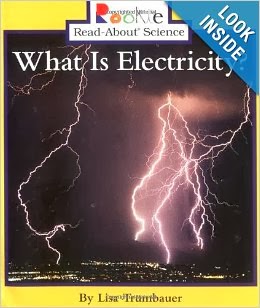 We charted our learning about electricity. 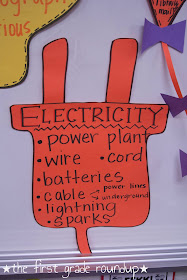 After that, we brainstormed a list of toys that need electricity {cords or batteries} to work.  The kids quickly saw how important it was to their lives that people like Ben Franklin studied and learned about how to use electricity! 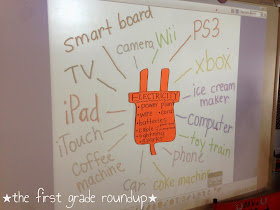 **I'm not really sure how a coffee machine or a coke machine are toys, but two of my sweet firsties explained that they were "really fun" to use, so I just went with it!

After our brainstorm, my kiddos used our OREO graphic organizer to write an opinion piece about their favorite electronic toy.  They were so excited to write about toys!  {You can read more about how I introduce this chart from a previous post.} 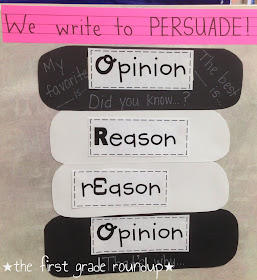 Then, we quickly moved on to Thomas Edison on Friday because of our shortened week.  We actually read an article on PebbleGo about Thomas Edison.  PebbleGo is a website that our librarian just bought a subscription to and it is a fantastic resource for our school!  Then, we charted our learning. 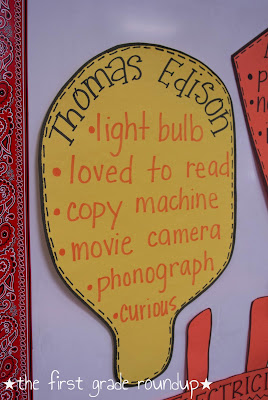 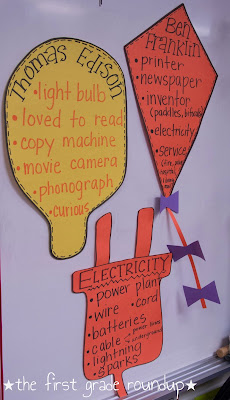 We also watched a short cartoon about Thomas Edison that showed his many failures in inventing the lightbulb and his perseverance.  This was important background knowledge because in a week or two, we will be listing and writing about character traits that all of our inventors possessed!

So when SATURDAY school came around, we had planned lots of fun activities and experiments with electricity!

We made an electrical circuit and tested out materials to see if they were conductors or not conductors of electricity.  We had so much fun doing this, that I apparently forgot to take pictures until the last one! 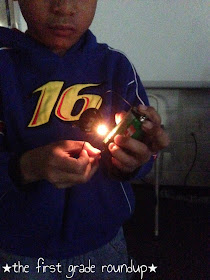 We used the recording sheet from the unit packet to record our hypothesis about whether or not each material would be a conductor and then we wrote the actual results. 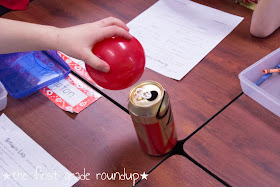 There were "Whoah's" and "Cools" going off like crazy in our room! 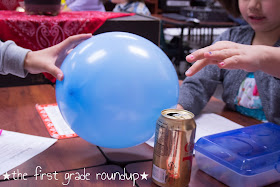 As always, we recorded our hypotheses and tested each question from the recording sheet {included in the unit packet}. 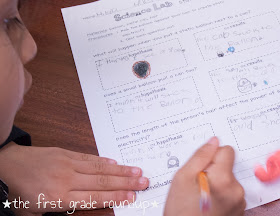 Seriously, ya'll, they had so much fun! They couldn't wait for the next activity!  After lunch we watched a video about electrical safety.  Every year, our local electrical cooperative sends Louie the Lightning Bug to do a skit for our whole school.  I really wish he could come during this unit, but it never seems to work out that way!  Louie has a website though, so we watched this video.  {warning: clearly this video is from at least 20 years ago...but that didn't seem to bother my firsties.  They loved it all the same!}  As another side note...this website is a great resource for older kids too.  It has lots of videos for all ages, activity suggestions for teachers and games!

After we discussed all of the safety tips from Louie's video, I paired up students and they wrote down rules for how to "Play it SAFE around electricity." And since it was Saturday and all....I decided that we needed to have a little craft time!  So we made our own Louie the Lightning Bugs to take home and remind us to be safe around electricity! I kept a few bugs to display with our safety signs! 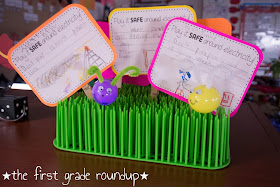 The kiddos absolutely adored their Louies.  Original idea came from Pinterest. I did change it up some by using googly eyes, foil hearts for the wings, no legs, and we put mini glow sticks inside of the eggs.  I used mini Easter eggs because that's what I had already at my house, but you could obviously use any size!

If you decide to make these, you are inevitably going to ask {just like I did}: so, how do you get the pipe cleaners to stick? Do you hot glue them? Drill a hole in them?  I innocently mentioned it to my hubby one night this week and he insultingly sarcastically said, "Just heat up a paper clip and burn a hole in the egg."  Now seriously ya'll, did anyone else out there know that? Or am I the only *clueless* one?  I laughed out loud when he said that.  His reply? "You never did that when you were a kid??"  No, I didn't, sweetheart.  I played with Barbies.  And cooked with my Easy Bake Oven {remember those??} And played dress up.

But apparently....that's what little boys are made of...playing with fire and burning holes in things...

ANYWAYS...I tried it out and it's actually a {{{genius}}} and super easy idea!  So all of that to say...use a candle, get the end of a paper clip hot and poke two holes at the top of the egg!

I have to admit...our little Louies turned out pretty stinkin' cute! 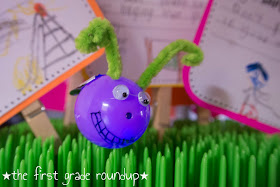 And the kids were SO proud!  It was such a fun way to end Saturday school!
at 3:36 PM